Plants > Wildflowers > Escalloniaceae
Most Escalloniaceae plants are native to South Africa and Australia. The family contains seven genera and about 130 species, of which only one (escallonia rubra) is found in the US, and even this has limited distribution, found in scattered places along the Pacific coast of south Oregon and far north California.

Plants are freely-branching shrubs, occasionally herbs or trees, with alternate leaves (sometimes evergreen), which have serrate edges and smooth, glandular, hairless surfaces. Flowers are borne as terminal clusters; they have the same number of petals, sepals and stamens - usually five, but ranging from four to nine. 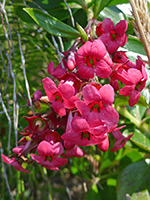