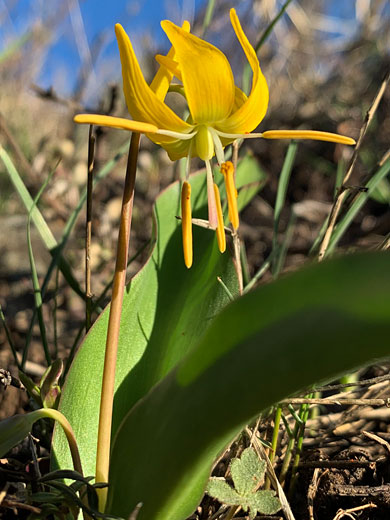 Erythronium grandiflorum, glacier lily, Grand Staircase-Escalante National Monument, Utah
Erythronium grandiflorum is the most widespread of 18 species in this genus (the fawn lilies) found in the West, and often occurs in extensive colonies, in meadows and open woodland, in mountainous areas; it is commonest in the Rocky Mountains. Flowers bloom soon after the winter snowmelt, from April at the lowest elevations to July and August around the highest peaks.

Flowers are solitary at the end of a hairless, leafless stalk, and are pendent, both in bud and when open. They are formed of six lanceolate tepals, yellow or (less often) pale cream, initially projecting forwards but soon angled back, and curved inwards, enveloping the top of the stalk. A white pistil and six stamens hang downwards. Stamens have white filaments and relatively large anthers (similar in length to the filaments), colored yellow/orange or sometimes red.

Common name:
Glacier lily
Family:
Lily (Liliaceae)
Scientific name:
Erythronium Grandiflorum
Main flower color:
Yellow
Range:
The Rocky Mountains, and other ranges to the north and west
Height:
Up to 12 inches
Habitat:
Sagebrush, open woodland, meadows, from 1,500 to 11,500 feet
Leaves:
Hairless, lanceolate, up to 8 inches long, tapering gradually to the stalk. Margins may be somewhat wavy. Plants have two leaves, at the base
Season:
April to July 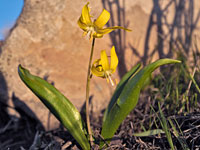