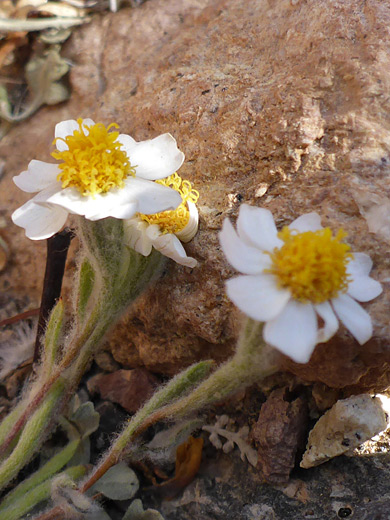 Flowerheads of eriophyllum lanosum have a narrowly bell-shaped involucre ringed by between eight and ten, pointed-tipped phyllaries which, like the leaves and stems, have a sparse to moderate covering of woolly hairs. Each phyllary subtends a white ray floret, sometimes crossed by faint pinkish veins. At the center are between 10 and 20 orange disc florets, which have glandular lobes and narrow, pointed, hairless anther appendages.

The reddish, branched stems may be drooping or ascending, and each branch is topped by a single flowerhead. Leaves are narrow, generally unlobed, and tend to point upwards, staying close to the stem.