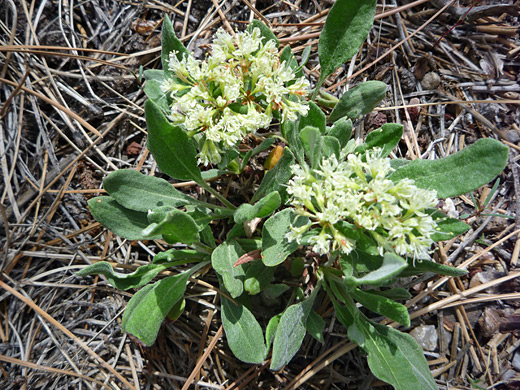 Eriogonum jamesii resembles the more widespread (and variable) eriogonum umbellatum, but can be distinguished by the leaves, which have a tomentose hair covering; short, flattened and matted. This is most noticeable on the undersides. Leaf margins are entire.

Petals are white to pale cream in color, hairy underneath, and they branch from the plant center, attached via short stalks; this latter characteristic also contrasts with eriogonum umbellatum, which has flower clusters at the end of longer, unbranched stalks. Beneath the flowers are several short green bracts, often reddish at the tips. Stamens are exserted.

James' buckwheat is a low growing species that can form extensive mats, several feet across. There are three varieties. Var undulatum, generally found in southerly areas, has wavy leaf margins, while the other two have flat leaf margins: they are the widespread var jamesii, for which the inflorescence is a compound umbel, and the uncommon var simplex of Kansas for which the inflorescence is a simple umbel. 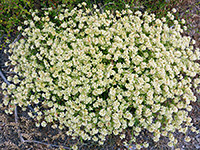 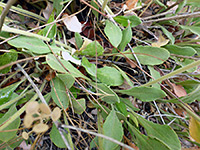