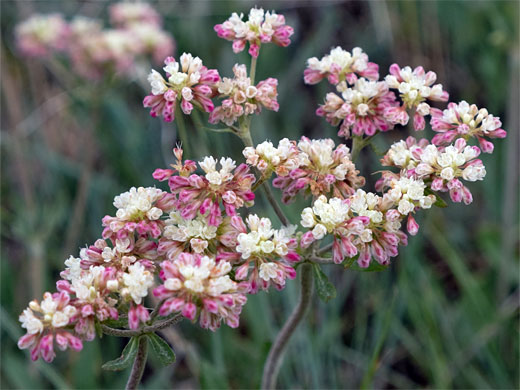 Eriogonum heracleoides var heracleoides (whorled buckwheat), Round Valley, Utah
Common names:
Whorled buckwheat, parsnip-flowered buckwheat
Family:
Buckwheat (Polygonaceae)
Scientific name:
Eriogonum heracleoides
Main flower color:
White
Range:
Idaho and all adjacent states, extending into northeast California, northwest Colorado and north Arizona
Height:
Up to 20 inches
Habitat:
Grassland, sagebrush, woodland, gravelly flats and slopes, from 700 to 10,000 feet
Leaves:
Narrowly oblanceolate to linear, up to 2 inches long, on stalks of up to 1 inch; in a whorl at the base. Lower surfaces have a dense covering of short hairs while upper surfaces are usually much less hairy. Margins are flat, unlobed and untoothed
Season:
May to September

The petiolate leaves of eriogonum heracleoides grow in a rosette at the base, though the terminal inflorescence is subtended by a whorl of up to ten leaf-like bracts, similar in appearance though somewhat smaller, and unstalked. The widespread var heracleoides has a second whorl about half way up the stem, while for the much less common var leucophaeum the midstems are either bractless, or have only one bract. Leaves are usually dark green, nearly hairless above, densely tomentose below.

Flowers are arranged in a compact, compound cluster up to 4 inches across, with individual groups attached by tomentose pedicels. Flowers are pink in bud, otherwise white to pale cream; they have a hairless corolla opening to six equal-sized lobes, with exserted stamens. Involucres are bell-shaped, pale green, partly divided into up to nine narrow lobes. 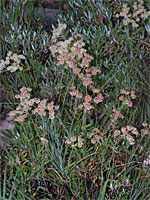 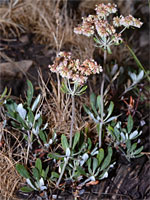 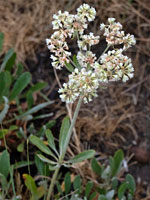