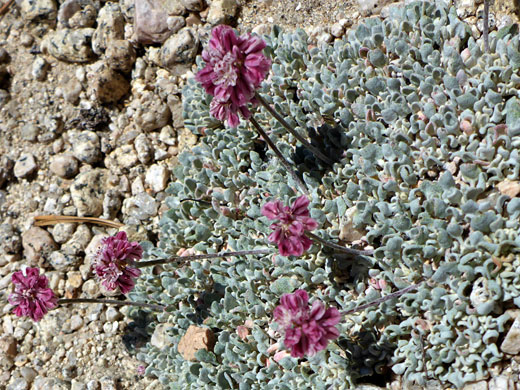 Eriogonum gracilipes is an uncommon species, restricted to the White and Inyo Mountains of eastern California, extending a little way into Nevada, and the eastern slopes of the southern Sierra Nevada. Plants are quite distinctive in appearance, with a dense mat of basal leaves from which rise leafless stalks topped by dense, spherical clusters of purple, reddish or (less often) white flowers. This is a high elevation species, found in exposed, rocky places above the timberline.

Leaves have a dense covering of white, tomentose, glandular hairs. The unbranched flower stalks are more sparsely tomentose, and rise well above the leaves. Clusters typically contain five to seven involucres, which are greenish, with five small lobes at the top; each holds several flowers, for which the tepals are fused to above the middle, and the stamens are exserted.