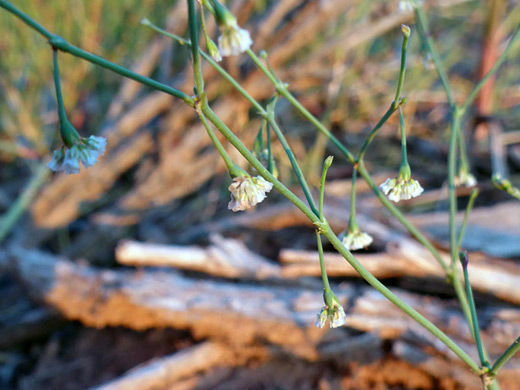 Leaves of eriogonum cernuum mostly grow at the base, in a neat rosette, attached by stalks of up to 1.5 inches. Both sides of the blades are covered by tomentose, cobwebby hairs; those on the upper surfaces are lighter in color. Leaf margins are flat. Leaves may by largely withered at flowering time. The hairless, branched stems are variable in height, but generally around one foot. They become red later in the season.

The inflorescence is a diffuse cluster extending up to 20 inches along the stem, comprising small, well-separated clusters of tiny white flowers, attached by hairless stalks. The clusters are subtended by three small bracts. The flower tepals are colored white to pale pink, becoming darker pink as they age. The outer tepals are constricted in the middle - wider towards the tip and the base, while the inner ones are more oblanceolate in shape. Eight stamens are slightly exserted. The flower stalks point downwards. 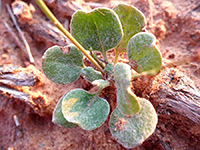