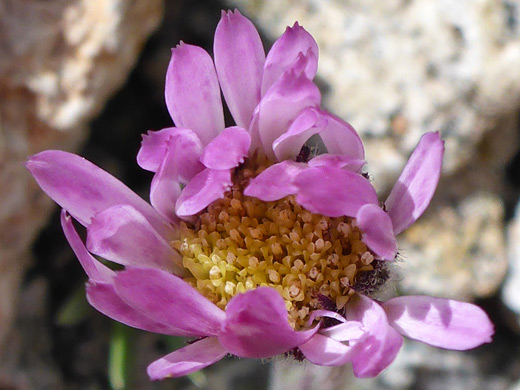 Erigeron vagus is one of the smallest species in this large genus, no more than 2 inches high, though the flowerheads are relatively large, and the plant is quite conspicuous in its habitats of high elevation meadows and rocky slopes. Plants are found in several discrete locations including the eastern Sierra Nevada in California, the Wallowa Mountains in Oregon, the Markagunt Plateau and the La Sal Mountains in Utah, and the Rocky Mountains of Colorado.

The flowerheads consist of between 24 and 40 short but quite broad ray florets, colored pink (usually) or white, around a center of several dozen yellow to orange disc florets. The minutely glandular phyllaries are deep purple (entirely, or just towards the tip), arranged in two or three rows, and covered with short, thick, straggly white hairs.

The upwards-pointing leaves grow mostly at the base; stem leaves are few in number, unlobed and reduced in size, while basal leaves are divided into three or five relatively broad, rounded lobes. Leaves and stems have a moderate covering of white hairs. Stems are unbranched, and are topped by a single flowerhead. Leaf edges are often purple. 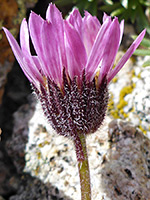 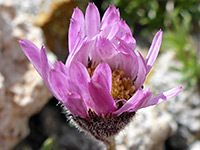 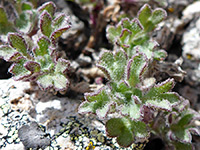 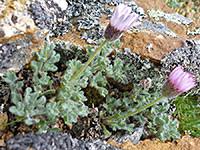