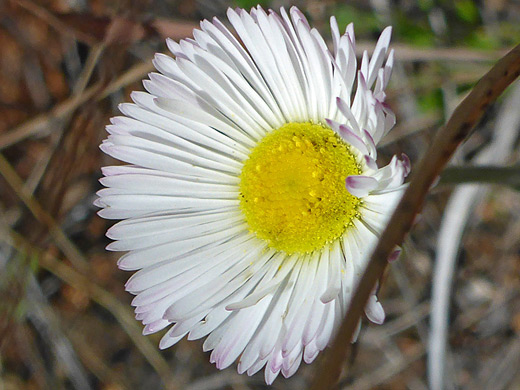 Erigeron tracyi is one of the smaller members of this large genus, usually around four or five inches tall. Leaves, stems and phyllaries have an even, dense covering of white hairs, which are spreading; pointing outwards or downwards. Leaves grow at the base, generally around one inch long, sometimes up to two inches, and they are usually partly divided into a few rounded lobes. Leaf edges may instead be coarsely toothed, or entire. Stolons are produced later in the season - horizontal stems that may take root to form new plants, hence the common name of running fleabane.

Stems are usually topped by a single flowerhead, containing between 60 and 130 ray florets and over 200 disc florets. The rays are mostly pure white, but often purplish at the tip. Phyllaries, in 3 or 4 rows, are purple towards the tip, green below, and often curved outwards slightly above the middle. 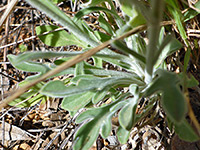 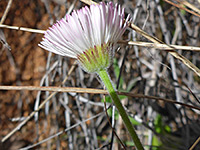