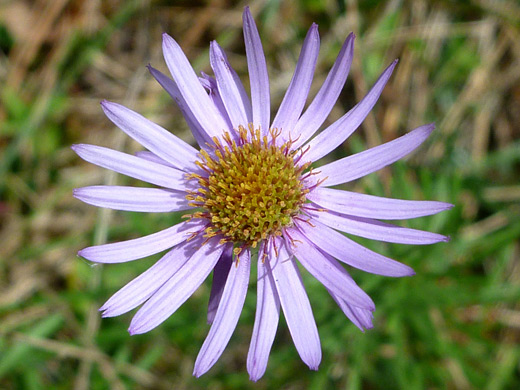 Many fleabanes look similar from a distance but can be distinguished by careful inspection: identifying features of erigeron foliosus include the ciliate leaves, the erect stems, the hairless (or only very lightly short-hairy) stems and the entire, non-clasping leaves. This is a variable species, however, reflecting the range of habitats, from coastal dunes to rocky places in the high mountains; five varieties are recognized - confinis, foliosus, franciscensis, hartwegii, mendocinus - differing mostly in the phyllary and leaf characteristics.

Leaves grow all along the stem, and tend to be both equally spaced and equally sized, though they vary in shape from very narrow to broadly oblanceolate. They may be hairless, or have a covering or short (most common) or long hairs. Flowerheads are produced singly or in small groups; they have between 15 and 60 lavender-pink ray florets around a center of 100 or more yellow (later brownish) disc florets. The narrow, light green phyllaries are in several rows, and are usually not spreading. They have a light covering of white hairs, pressed against the surface. 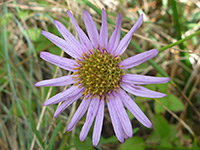 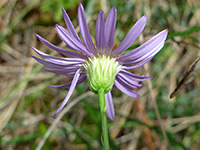