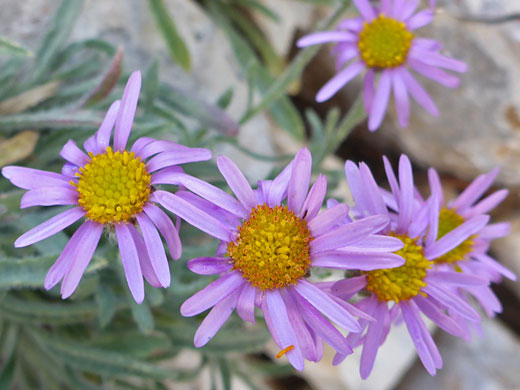 Erigeron clokeyi grows in the Sierra Nevada of California, the Great Basin of Nevada, especially in the Mount Charleston area, and some isolated mountains in Beaver County, Utah. Flowerheads are solitary or (less often) paired, at the top of stems which have a covering of spreading hairs, somewhat shaggy in appearance. Leaves are narrow, widest towards the tip, often partially folded up along the midvein, and noticeably hairy. Leaves may also have a pair of parallel lateral veins.

Phyllaries are green, and have a sparse to moderate covering of shaggy, non-glandular hairs, while the surfaces are somewhat glandular. Flowerheads have between 20 and 40 ray florets, colored white, pale pink or pale blue, around a tight cluster of orange-yellow disc florets.

There are two varieties of erigeron clokeyi; var clokeyi, found only on Mount Charleston, and var pinzliae of other areas; the former has longer, somewhat appressed leaf hairs, while the leaf hairs on the latter are shorter, and more spreading. 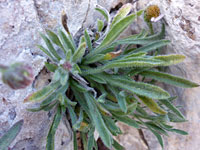 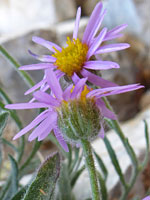