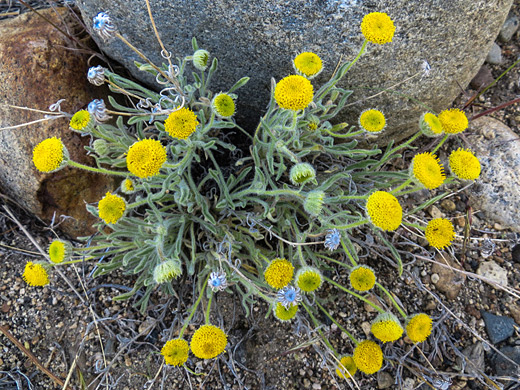 Flowerheads of erigeron aphanactis are unusual in that they have no ray petals, hence the dominant color is yellow of the central florets rather than the usual white or purple of the rays - even though these tubular yellow structures are in fact ray florets, and are pistillate, lacking stamens. They number between 30 and 45, forming a bright disc around half an inch in diameter. Florets have a covering of short hairs. The phyllaries are in two or three rows, covered by longer, coarser hairs, which are slightly glandular. The stems are topped by between one and four flowerheads.

Stems and leaves have a similar hair covering to the phyllaries, and the hairs are more obviously glandular. Stems may be erect or slightly leaning. Leaves are mostly basal, and they have entire edges.