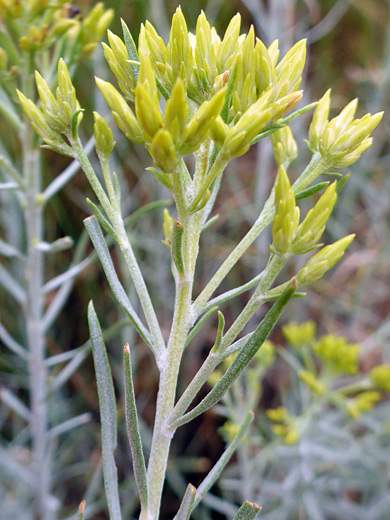 Small yellow flowerheads - ericameria nauseosa, Knife Edge Trail, Mesa Verde National Park, Colorado
Ericameria nauseosa is the most common and widespread rabbitbrush species in the West, found over a wide range of elevations, and blooming for many months. It is also one of the most variable of all plants, with 22 recognized varieties, differing in such characteristics as leafiness, stem height, hairiness, and various aspects of the florets and phyllaries.

Flowerheads are produced in flat-topped or rounded clusters, held on stalks of up to one inch, and sometimes subtended by a few scale-like bracts. The involucre is short-cylindrical in shape, ringed by between 10 and 31 narrow, yellow-brown phyllaries, in three or five rows, and noticeably different in length. Flowerheads usually have five yellow disc florets (less often four or six), and no ray florets.

Young stems and branches appear white due to a dense covering of tomentose hairs. The greyish-green leaves usually have a similar hair covering; they grow at closely-spaced intervals all along the stems, and are often angled upwards. All leaves have a midvein; those of some varieties have one or two pairs of side veins. Leaf shape can vary from oblanceolate, up to 0.4 inches wide, to thread-like, only 0.01 inches wide (0.3 mm). 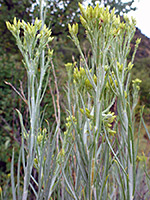 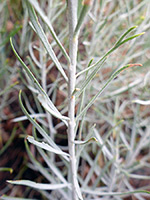