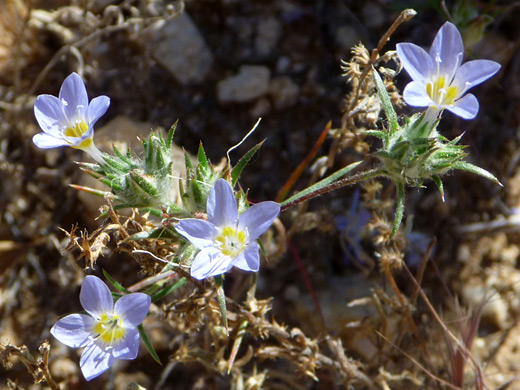 The miniature woolly star, eriastrum diffusum, is a small, many-branched species. The thin stems are hairy, grow upwards or at an angle, and bear narrow, linear leaves at intervals, and especially at the tips, where they form a spherical cluster, with a mass of longer, woolly hairs at the center. Leaves and stems are green to red-brown in color.

The radially symmetric flowers have a light pink, narrowly funnel-shaped corolla, less than half an inch long, opening to five rounded-tipped lobes which are yellow around the base and pale blue to lavender above. Five white stamens protrude from the center of the floral tube, slightly different in height. Underneath are five woolly green, leaf-like sepals. Flowers are about a third of an inch in diameter. 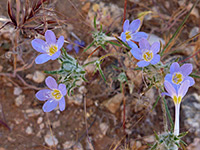