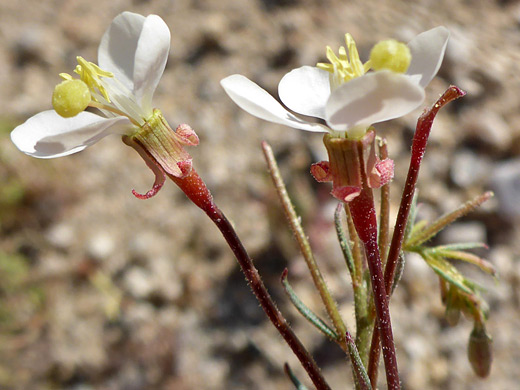 Two white flowers, with recurved sepals; eremothera refracta, Bristol Mountains, Mojave Trails National Monument, California
Stems of eremothera refracta are usually red, as are the margins of the narrow leaves. Stems and leaves have a sparse covering of short, strigose hairs, which may be glandular. Plants produce several stems, branching from the base, bearing narrow leaves at widely-spaced intervals. The lowest leaves are generally broader towards the top, while those higher up the stem are essentially linear. Leaves may have slightly wavy edges, lined by a few tiny teeth.

Flowers are nodding in bud, later erect; they consist of four red-purple sepals, fully recurved when mature, and four slightly longer (up to 0.3 inches), clawed white petals, reddish when withered. At the center are eight stamens, with white filaments and transverse, pale yellow anthers, and a pistil up to twice as long, topped by a spherical stigma. The fruit is a narrow red capsule, coiled or straight, up to 5 inches in length. 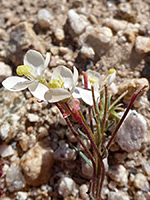 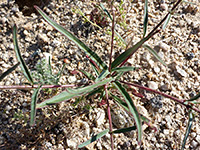