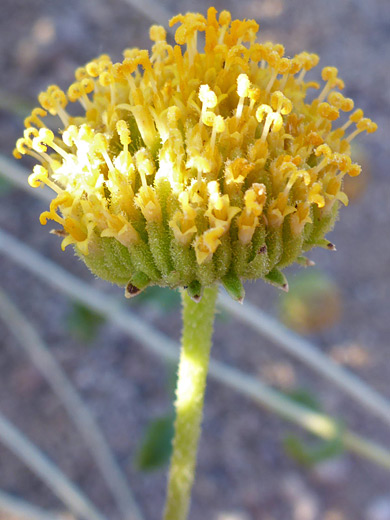 Flowerheads of encelia frutescens lack ray florets; they have only disc florets, up to a hundred of them, each formed of a narrow, tubular corolla that opens to five, pale yellow, triangular lobes around an exserted central column of fused anthers and a longer style, topped by a two-lobed stigma. The green, lance-shaped phyllaries are in two or three rows, covered with short, bristly hairs. Flowerheads are solitary. In some locations (in California) the usual flowering period in the spring may be followed by a second bloom in late summer.

The thin stems branch from towards the base, which becomes woody with age, covered by fissured bark. Younger stems are whitish in color, and strigose hairy. Leaves are relatively thick, borne at alternate intervals all along he stems, with a lighter covering of thicker hairs, especially along the edges. Leaves are attached by short stalks. 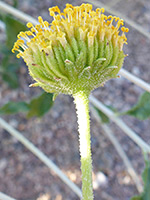 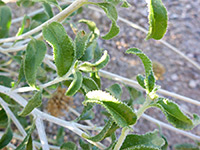 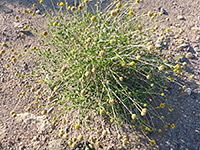