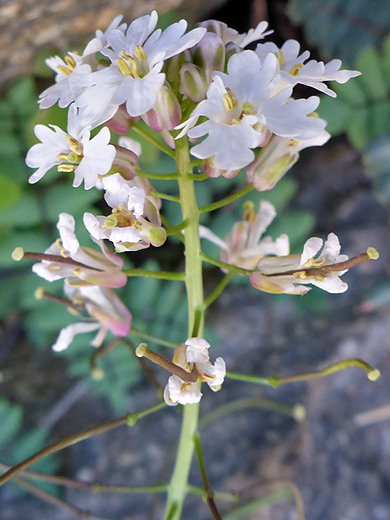 Many brassicaceae species look similar, but dryopetalon runcinatum is distinctive because of its spatula-shaped petals, which are deeply lobed; they have one broad terminal lobe and one or two (occasionally up to five) pairs of smaller side lobes. Petals are usually white, less often pale purple. The four sepals are green at the tip, purplish at the base. At the center of the flower are four yellow-tipped stamens and a greenish stigma on a brown style, all exserted. The style elongates as the flower withers to form the narrow, cylindrical fruit, which points vertically upwards. Flowers are produced as terminal clusters.

Stems usually have short, sparse hairs towards the base, but are hairless higher up. They branch, mostly towards the top. Leaves are variously lobed or divided; those near the base are stalked, the petiole up to 2 inches long, while upper stem leaves are sessile, and smaller, though similarly lobed. Leaf surfaces also often have a sparse hair covering. 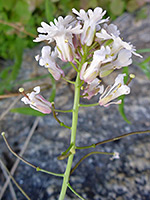 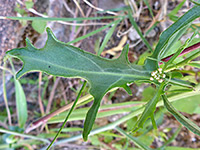