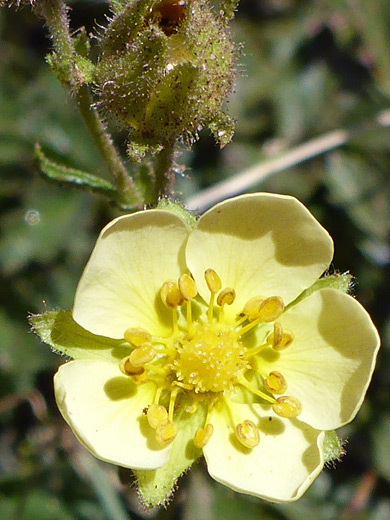 Drymocallis pseudorupestris is most often round in rocky places at medium to high elevations, forming low clumps of overlapping, branched, leafy stems from which rise slender stalks toped by white or pale yellow flowers. Stems are densely covered by glandular hairs, which are branched towards their tips. Leaves are usually glabrous though can also be hairy, sometimes densely. Leaves are divided into an obovate terminal leaflet and 2 to 5 (usually 3 or 4) pairs of lateral leaflets. The leaflets are lined by up to 15 teeth, generally single rather than double. Basal leaves, if present, number just one or two, and have two or three pairs of side leaflets, reduced in size.

The flowers are borne on stalks of up to one inch, glandular and hairy. Flowers are formed of five green sepals, hairy underneath, and five obovate petals, touching or slightly overlapping. Petals are a little longer than the sepals. The flower center contains a ring of yellow stamens around a group of small carpels. 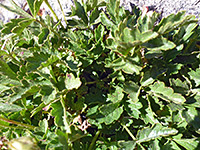 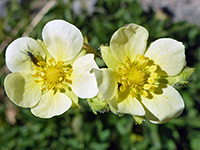