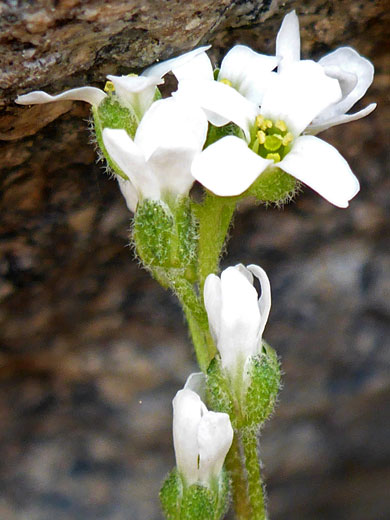 Draba breweri, or cushion draba, is most widespread across the Sierra Nevada, extending into Nevada in the vicinity of Lake Tahoe; it also appears further north in the Cascade Range. This is a low growing species, reflecting its habitat of exposed, rocky places in the alpine zone.

Leaves are basal and cauline (usually one to three), these latter attached by short, ciliate stalks. Upper and lower leaf surfaces, and the unbranched stem(s), are covered by branched, white hairs - divided above the base into up to ten rays. The inflorescence is a narrow. bractless cluster containing up to 18 flowers, which have four light green sepals and four slightly longer white petals. The sepals and the (appressed) pedicels also have a covering of branched hairs. Fruits are flat, linear pods, usually twisted. 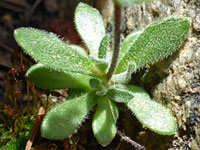