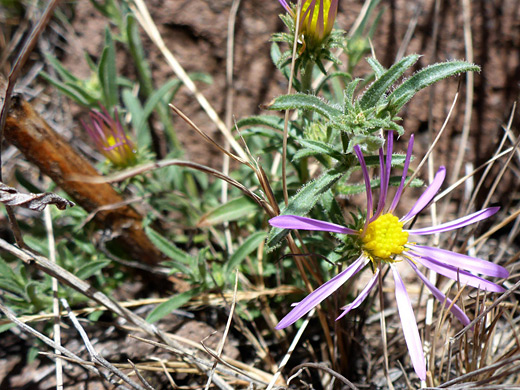 Developing flowerhead of dieteria asteroides, Yapashi Trail, Bandelier National Monument, New Mexico
All surfaces of the leaves, stems and phyllaries of dieteria asteroides are noticeably canescent hairy, sometimes though not usually glandular. Leaves are narrow and unlobed, with either entire or finely toothed margins, and those towards the base of the stem are clasping.

The involucre is ringed by several rows of narrow, green phyllaries, becoming more reflexed away from the flowerhead, which consists of up to 30 pink or purple ray florets around a center of yellow disc florets. Phyllary tips taper to an elongated point; this, and their overall hairiness help differ dieteria asteroides from similar species, for which the phyllaries tend to have shorter tips, and are hairy only at the apex or along the margins.

There are three varieties of dieteria asteroides. For var glandulosa the hairs are mostly glandular, though can sometimes be largely absent, while the other two have a non-glandular hair covering: the widespread var asteroides, for which the mid-stem leaves are relatively wide (up to 0.7 inches) and have serrate margins, and var lagunensis of San Diego County, California, with mid stem leaves less than 0.3 inches wide, and entire margins. 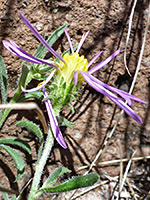 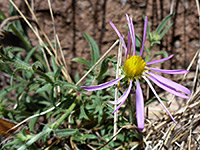