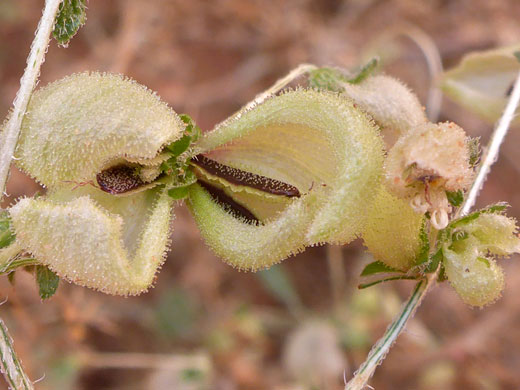 Dicoria canescens (desert twinbugs), Valley of Fire Wash, Valley of Fire State Park, Nevada
Flowerheads of dicoria canescens are atypical for the asteraceae; they are formed of five (less often four, six or seven) short, green, recurved, lanceolate, leaf-like outer phyllaries and between one and four larger, thicker, round to broadly obovate inner phyllaries, pale green to yellowish, each of which encloses a pistillate floret and (sometimes) several staminate florets, white or reddish. Fruits are flattened, ovate, reddish-brown discs, pale green along the margins, often gland-dotted. The flowerheads may be single, but more often occur in pairs, and have an insect-like appearance, hence the common name of desert twinbugs.

Phyllaries, leaves and stems usually have a dense covering of short, white hairs. Leaves are opposite near the base, for spring growth, while above, and later in the tear, all are alternate. Plants may bloom all year, but most strongly in autumn and winter.

Common names:
Desert twinbugs, bugseed
Family:
Aster (Asteraceae)
Scientific name:
Dicoria canescens
Main flower color:
Yellow
Range:
From southern California to Utah and northwest New Mexico
Height:
Up to 3 feet
Habitat:
Washes, plains, flats, dunes, often on alkaline soils
Leaves:
Opposite towards the base, alternate above. Blades are lanceolate to ovate, up to 2 inches long and 1 inch wide, on stalks of around half an inch
Season:
September to January 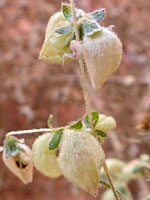 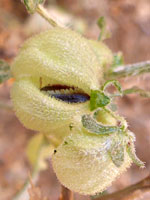 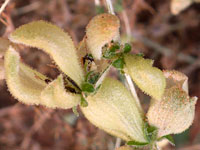