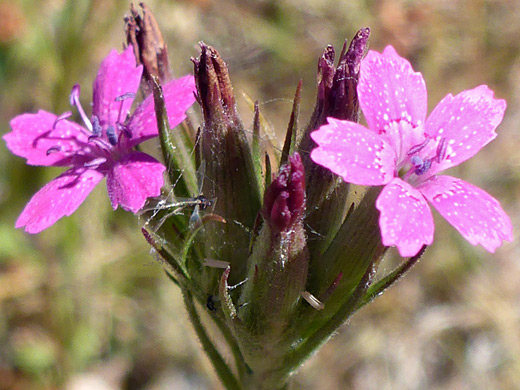 Dianthus armeria, a species native to Asia and Europe, is found in the US most extensively in the northeast, but also in scattered areas of the West. The inflorescence is an open cluster, usually containing between three and six flowers, occasionally just one. Flowers are essentially sessile, and are subtended both by narrow, linear bracts, often reddish towards the tip, and similar bracteoles. The bracts are comparable in length to the green calyx; up 0.8 inches. The calyx is lined by up to 25 narrow, parallel ribs. All green plant parts have a covering of short white hairs.

The corolla is pink, opening to five clawed, white-dotted petals held at an angle of 90 degrees. Petals are notched at the tip, and less than a quarter of an inch long. The flower center contains ten pink stamens and two pink styles. 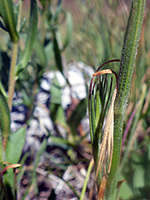 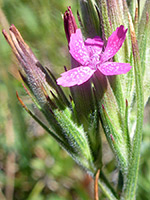