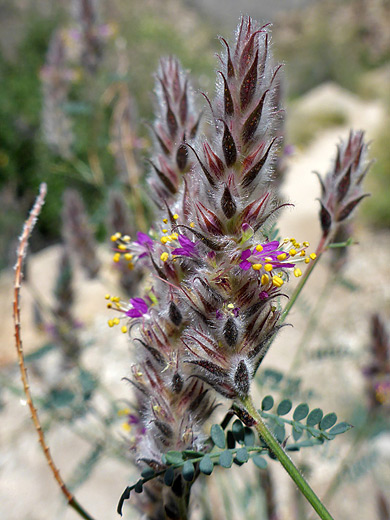 Dalea pringlei is an attractive, small-flowered species found on slopes and along canyons, in desert areas. Stems are grey-green, hairless and upright, and slightly woody towards the base. Leaves are compound, with an odd number of tiny oval leaflets; one terminal and up to 23 opposite, non-overlapping pairs. Leaflets are also hairless, and colored greyish green.

The flower spikes are relatively long (up to 4 inches), but thin, less than half an inch across. Most visible are the purplish, lance-shaped bracts between the flowers; they taper to a narrow point, and are densely covered by long, silky hairs, on both surfaces. The lower surfaces of the bracts are dotted with small glands.

The flower corolla is bright pink-purple, and its five petals are clawed (narrow at the base), and quite well-separated from each other. Ten stamens protrude well beyond the petals; they have thin white filaments and larger yellow anthers. Flowers appear in stages, from the base of the inflorescence upwards; often only three or four are in bloom at any one time 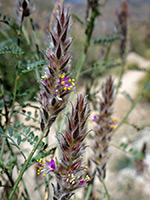 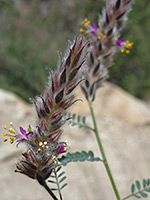