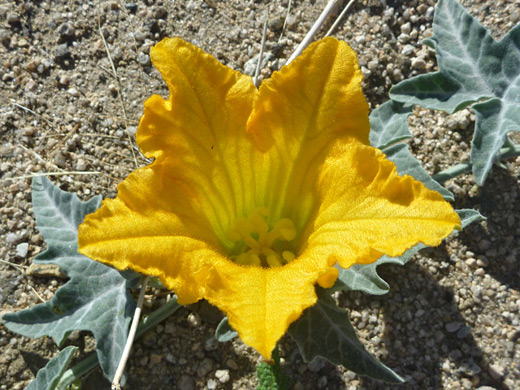 The cup-shaped flowers of cucurbita palmata are unusually large, up to 3 inches long, opening to four, five or six lobes, which tend to have irregular edges and a few lengthwise grooves. Like all cucurbitaceae species, plants are vines; they grow sideways, the stems along the ground, with large leaves at closely-spaced intervals. Leaves are cordate in outline, but sharply divided (about half way to the central vein) into 4 to 6 lobes, each with a few smaller lobes, or teeth, along the edge. Leaves and flowers have a covering of short, dense hairs.

One flower is produced from each leaf node, and it may contain either stamens or pistils. Nodes also produce a branched tendril. The fruit is a spherical melon, up to 4 inches in diameter, initially dark green with lighter stripes, becoming all yellow as it ripens. Despite its appearance, the fruit is not edible by humans. This is a relatively uncommon species, restricted to arid regions in and around the Mojave Desert. 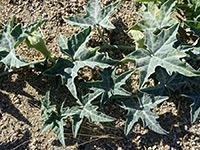 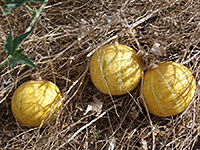 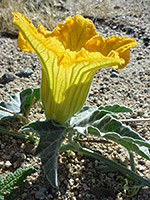