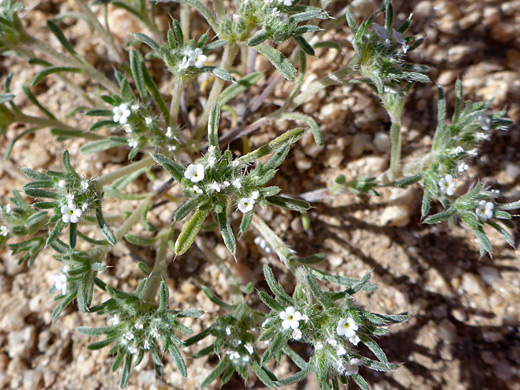 Cryptantha circumscissa is a low growing species that forms small, flatted, rounded mats, typically 6 inches in diameter. The short (up to 3 inches), slender, branched stems are held at around a 45 degree angle, and are covered both by flattened strigose hairs and longer, bristly hairs. Leaves have a similar hair covering; they terminate in a spike and are slightly folded up along the midvein.

Flowers are produced in small, bracted clusters, of between one and five, and are attached by very short stalks. Flowers tend to point upwards. The calyces are bristly, similar in hairiness to the leaves. The appendages at the base of the corolla lobes are pale yellow, and less pronounced than for most other cryptantha species.