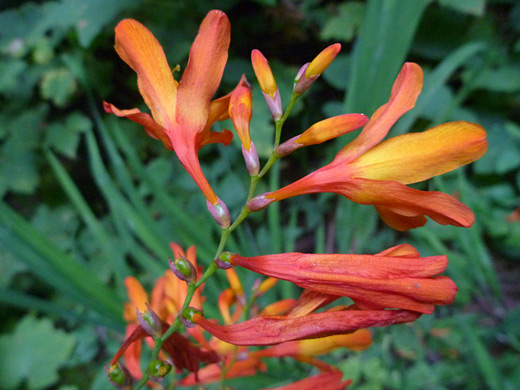 Crocosmia x crocosmiiflora is a naturalized species, originating in France, and also a hybrid, between crocosmia aurea and crocosmia pottsii (both from Africa), neither of which occur in the US. The hybrid is found mostly along the Pacific coast, and spreads from cultivated plants. Leaves are long and narrow, growing in a dense cluster at the base of the stems, which rise to heights of 2 to 3 feet and are topped by the elongated inflorescence; large reddish-orange flowers at alternate intervals, covering more than half of the stem.

Flowers are formed of a small, purplish calyx and a six-lobed corolla, up to 2 inches long, generally with bilateral rather than radial symmetry. The base of the lobes have a few darker red marks. Three stamens and branched style project a little way beyond the lobes.