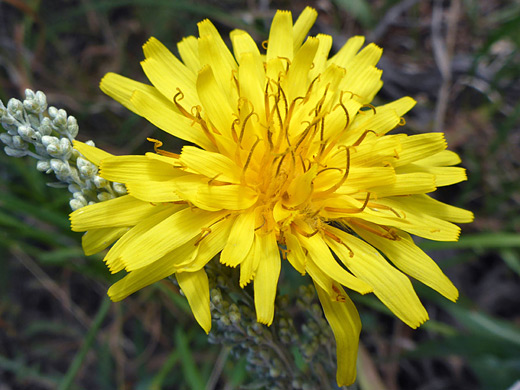 Crepis runcinata is characterized by nearly or totally leafless stems, and basal leaves generally lacking any lobes - most hawksbeard species have some stem leaves, and lobed basal leaves. Plants produce one, two or three stems, which branch a few times around the midpoint. Leaves are long and thin, quite variable in shape, with edges that may be entire, finely toothed, or (less often) coarsely toothed or lobed. Leaf bases taper very gradually to the stalk. Leaves and stems are usually glabrous, though the top of the stem may have some hairs.

Flowerheads are produced singly or in small, open clusters, of up to 15. At the base of the involucre are between 5 and 12 narrow bractlets (calyculi), while above are between 10 and 16 phyllaries, usually with lightly hairy and/or glandular faces. The yellow florets number between 20 and 50; the corollas have five tiny lobes at the tip, and they mature in stages, so that the inner are shorter than the outer.

There are seven subspecies of crepis runcinata; four (andersonii, barberi, hallii, imbricata) are quite localized, while the others (glauca, hispidulosa, runcinata) more widespread. They differ in leaf shape and width, leaf margin characteristics and phyllary characteristics. 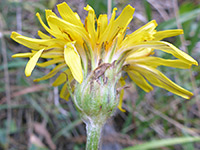 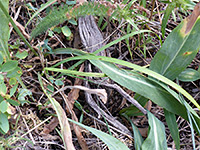 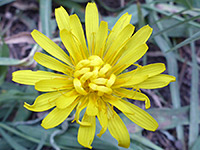 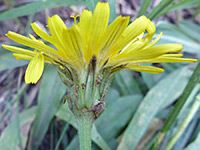 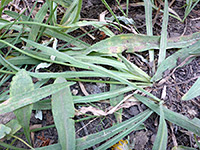