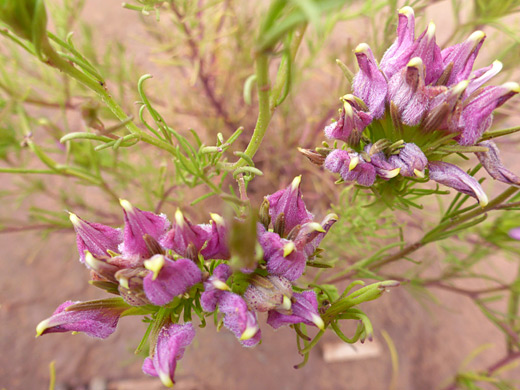 The unusual flowers of cordylanthus wrightii consist of a green, sheath-like calyx, partially divided, enclosing a yellow to reddish-purple, two-lipped corolla. The upper corolla lip is expanded to form a hood, containing a style and four stamens, while the slightly smaller lower lip is held against the upper, and is divided into three touching lobes. The tips of the lobes are greenish yellow, and they form a tiny opening through which the anthers are just visible. The outside of the corolla has a covering of white hairs, and is minutely glandular. Flowers are usually produced in pairs.

Beneath the flowers are several bracts, the outermost divided into narrow lobes, similar to the leaves, which are borne at closely-spaced intervals all along the tall, branched stems.

Most specimens of cordylanthus wrightii are ssp wrightii; two less common variants are ssp kaibabensis of the Kaibab Plateau in north Arizona, and ssp tenuifolius of Utah. 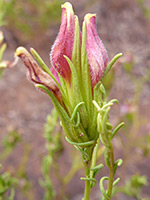 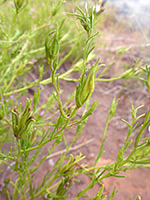 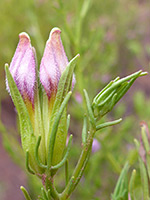 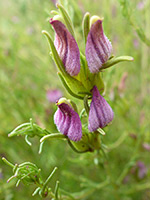