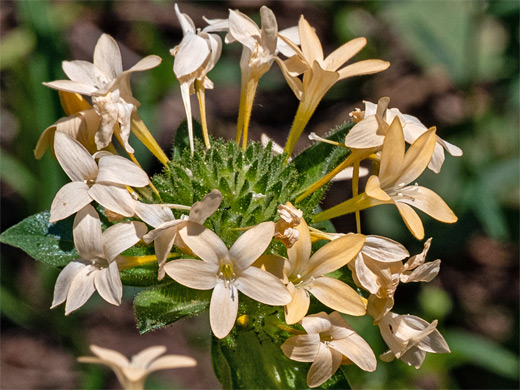 Leaves of collomia grandiflora are bright green, somewhat shiny, and held at a 90 degree angle from the stem, which is usually unbranched. They are relatively widely separated, and alternately arranged, from near the base all the way to the tip, right below the flowers.

The inflorescence is a compact, spherical cluster, terminal and sometimes also from the uppermost leaf nodes, with flowers opening in stages starting from the ourside. Corollas have a narrow. yellow-orange tube, up to one inch long, opening to five spreading, lanceolate lobes, pale orange to nearly white. The outer surface of the corolla is sparsely covered by short, glandular hairs. The five stamens have white filament and blueish anthers. Flowers are sessile.

Occasionally plants are cleistogamous, self-pollinating, in which case the flowers are much smaller, and the stem shorter. 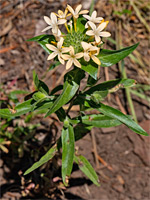