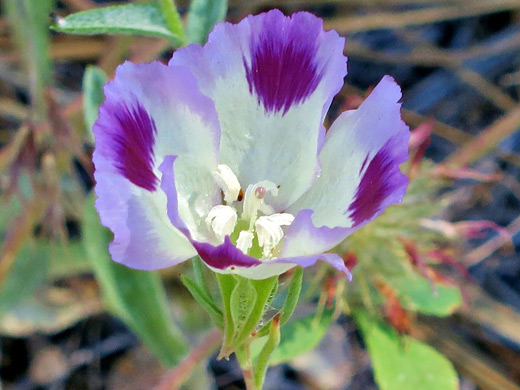 The attractive flowers of clarkia williamsonii are formed of four petals, overlapping for less than half their width, colored white around the base, pale purple higher up, with a darker purple patch near the upper edge. Petals are around one inch long. At the center are eight equal-length stamens with white anthers, and one pinkish, four-parted stigma projecting a little way above. In rare occurrences, the petals are uniformly red. The four pointed green sepals are fully reflexed, bent back along the stem, and are often fused in two pairs. The outer surfaces of the sepals have a covering of white hairs.

Stems are erect, lightly covered by short, soft hairs, in the range 2 to 3 feet high, and the relatively large flowers are quite noticeable. The plant is found across the Sierra Nevada foothills, and is common in lower elevation regions of Yosemite National Park.