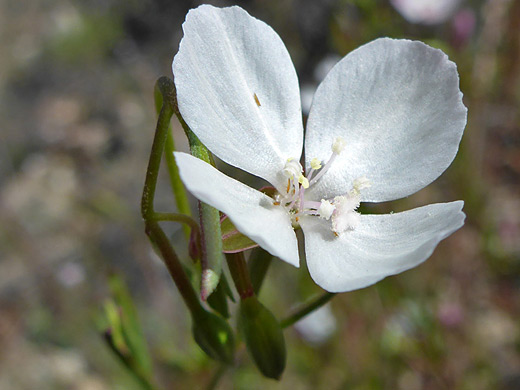 Petals of clarkia epilobioides are pure white when blooming, becoming pink then reddish as they wither. The green buds are pendent, but the flowers point upwards. Flowers have four sepals, becoming reddish, and often remaining fused, either in pairs or all of them, so that the petals protrude through an opening on one side. Petals are less than half an inch long, obovate in shape and narrow at the base. When the flower is fully open the petals form a shallow bowl, and they do not overlap. There are eight stamens fixed at the flower center, four of which have longer filaments and larger, darker anthers than the other four. The style is topped by a rounded stigma, and is about the same length as the longer stamens.

Stems and leaves have a sparse covering of short hairs. Leaves grow on short stalks, are narrow and approximately linear in shape, and are angled upwards, typically around 45 degrees from the stem. 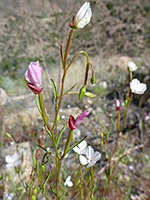 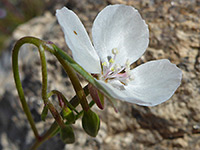