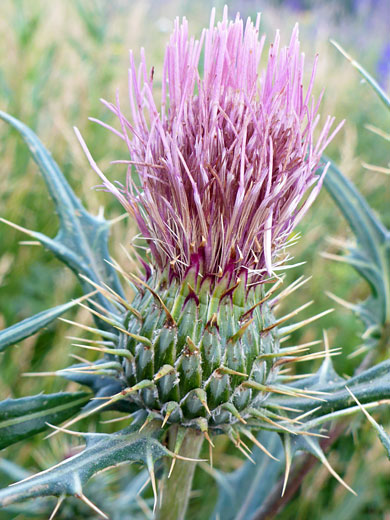 Cirsium wheeleri is most common in central Arizona, around the edge of the Colorado Plateau and the Grand Canyon region; its range extends to the other Four Corners states. Leaves are less spiny than many other thistles; they are relatively long and narrow, with a few triangular lobes along the margins, each terminating in a pale yellow spine. Leaf margins are lined with much smaller spines, quite well separated. The terminal leaf lobe is the longest, tapering smoothly to a point. Plants produce one to several stems, branching a few times. Stems have a covering of grayish hairs.

Flowerheads are produced at the top of the stem, either singly or in a small cluster, and, sometimes, also from the uppermost leaf nodes. The approximately spherical involucre is lined by up to nine series of spine-tipped phyllaries, ascending or spreading. Phyllaries have a narrow, lighter colored ridge up the middle. Inner phyllaries are often purple at the tips. Florets may be colored pale purple, pink or white, and are around one inch long at maturity. 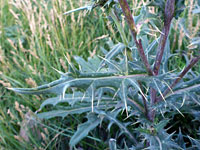 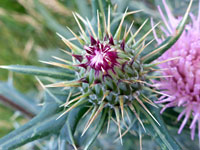 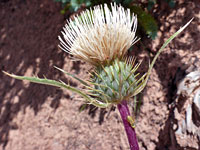