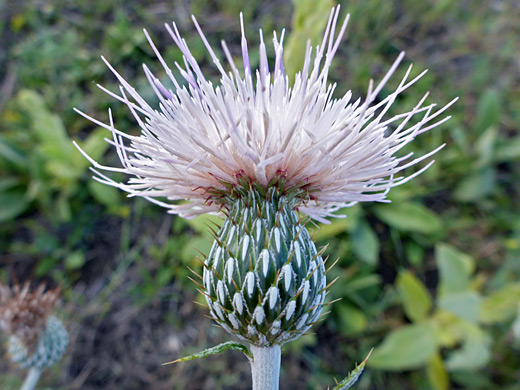 The dark green phyllaries are the most distinctive feature of cirsium undulatum; the outer faces have a prominent white ridge down the middle - often relatively wide though sometimes narrow - and their tips terminate in a spine, angled away from the involucre. Phyllaries are in 8 to 12 rows, becoming longer and narrower towards the top. The color of the disc florets ranges from white to pale pink to purple, and their length from 1 to 2 inches. The corolla lobes are about half as long as the corolla tubes. Plants produce up to ten flowerheads, in an open, branched, terminal cluster.

Stems are stout and erect, reaching a height of 7 feet or more. They are densely covered by greyish-white hairs. Branches, if present, are few in number, and only on the upper part of the stem. Leaves are lined by teeth or lobes, deep or shallow, widely or closely spaced. Lobes terminate in a yellowish spine, up to half an inch long. Leaf margins are conspicuously wavy. The upper leaf surfaces have a sparse hair covering, while the lower surfaces are more densely covered. 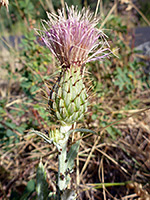 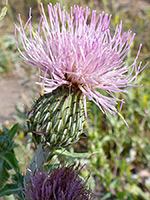 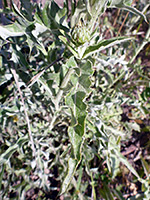 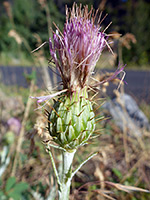 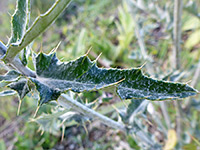