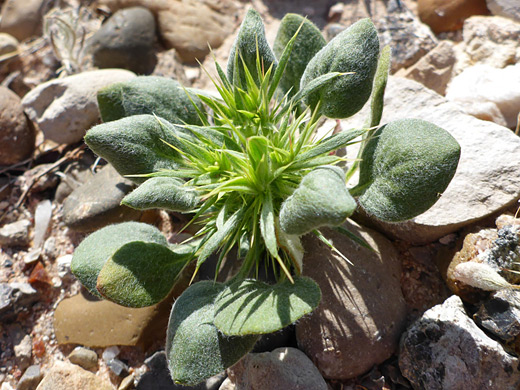 The yellow flowers of chorizanthe rigida are very small, less than 0.1 inches across, formed of six partly fused tepals and nine stamens. More noticeable are the three lobes of the enclosing green tubes; these taper to a sharp, rigid spike up to half an inch long, while beneath them are similar-looking bracts, with spines of up to one inch.

Plants are generally low growing, sometimes just one inch tall and appearing to have no stem, but in favorable locations they can reach 6 inches, and the spiny, dry stems of dead specimens can persist for several years. Leaves (especially the undersurfaces) and stems have a covering of soft hairs. Basal and lower stem leaves are oval-shaped, and grow in stalks, while upper stem leaves are linear or narrowly oblanceolate, stalkless, and also terminate in a spike, which hardens with age. Lower stem leaves wither soon after flowering. 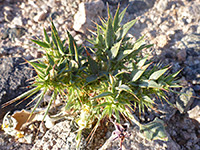