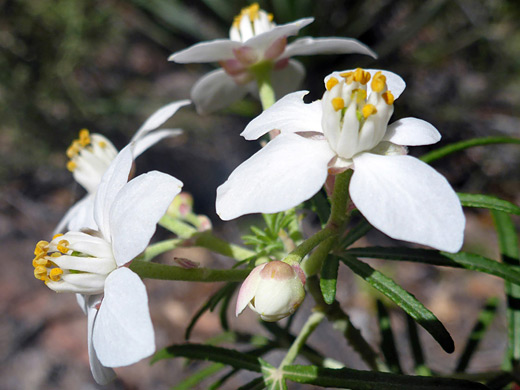 Choisya dumosa is the most widespread of the two US species of this genus, though its range is still quite limited, to southeast Arizona, south New Mexico and far west Texas; it is more common in Mexico. Flowers are similar in shape and aroma to the true oranges (in the citrus genus); they are formed of five (less often four) pinkish sepals, below the same number of white petals, which are larger, up to half an inch long. Petals are clawed at the base. A ring of stamens projects upwards at the flower center; they have wide white filaments and bright yellow anthers. Flowers are produced in small clusters at the top of the branches, attached via stalks several inches long.

The dark, evergreen leaves are palmately divided into up to 13 narrow, linear leaflets, which have a depressed midvein and a knobbly surface texture, due to small glands. Stems are freely branching. Plants have a low, rounded outline, typically growing about 3 feet tall.

Specimens in Arizona are sometimes considered to be a separate species, choisya arizonica. 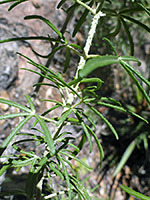 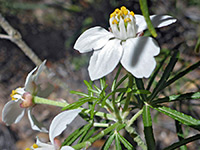