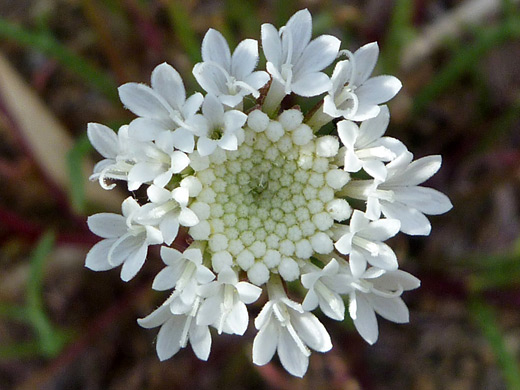 Chaenactis fremontii grows in arid locations, across the Mojave Desert and adjoining areas. Stems and leaves are green, becoming purple as they mature, especially around the base. Stems branch a few times, generally from below the middle, and are often completely or mostly leafless when flowering occurs. Leaves - concentrated around the base - are thick and succulent-like, divided into a few well separated, linear lobes.

Flower clusters (initially flat-topped, becoming more spherical) are usually borne singly, and consist of disc flowers only, those around the edge noticeably larger than those towards the middle, resembling ray florets. These outer florets are bilaterally symmetric, while the others have the usual radial symmetry. Flowers are all-white or very pale pink. The light green, blunt-pointed phyllaries below the flower head, and the upper part of the stems, have a covering of fine, short, glandular hairs. 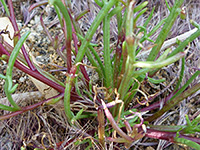