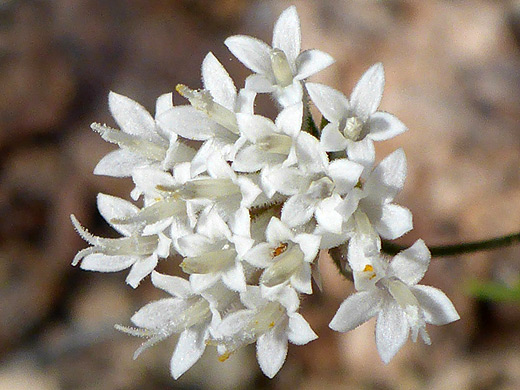 Chaenactis carphoclinia, an annual species, inhabits desert regions of California, Arizona, Nevada and Utah. Leaves grow at the base and at alternate intervals along the short stems; they are divided into short, linear, cylindrical lobes, quite thick and succulent-like. The lowest leaves often wither by flowering. Plants produce one stem, which branches a few times towards the tip, each branch topped by one flowerhead. Stems and leaves have a covering of short, fine, powdery hairs.

Flowerheads contain between 3 and 20 white (less often pale pink), five-lobed disc florets above a cylindrical or hemispheric involucre, which is lined both by pointed, hairy, glandular phyllaries, reddish in color, and similar-looking paleae. 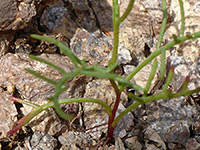