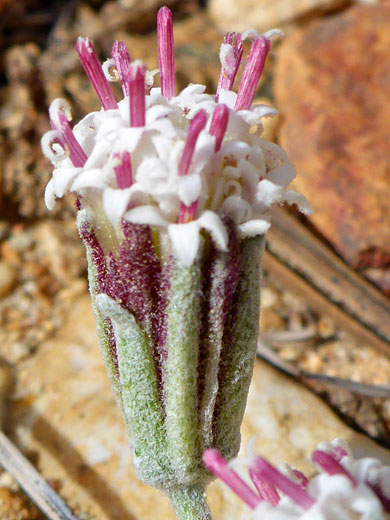 Chaenactis alpigena, a perennial, can be identified by its solely basal leaves (non cauline), the non-glandular phyllaries, and the solitary flowerheads, on top of unbranched stems. This species is found only in the southern and central Sierra Nevada, with a small outlying population in the White Mountains, extending into Nevada.

Leaves are variously lobed, palmately or pinnately, and they have a covering of woolly hairs, white to greyish-yellow. Lobes are generally angled up and down rather than being all in the same plane. Leaves tend to have different characteristics in the north of the range compared with those in the south. Plants may produce just one stem, or up to 25. Flowerheads have a cylindrical involucre, ringed by linear, hairy phyllaries, green to purplish in color, blunt-pointed at the tip. They contain disc florets only, around ten of them, with white or pale pink corollas, and exserted stamens and styles. 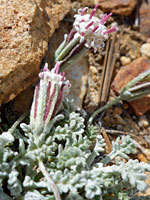