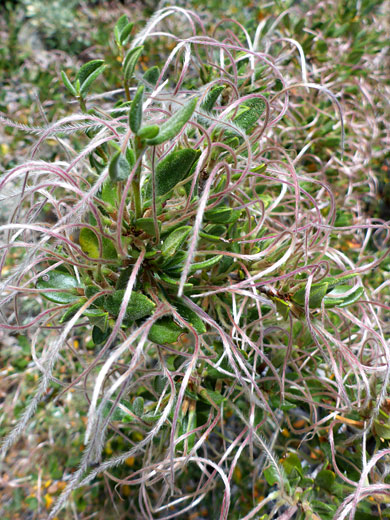 Cercocarpus ledifolius can vary in form from a small shrub just a few feet high to a tree up to 30 feet. This species is particularly common across the Sierra Nevada in California, and is also found in most other mountainous regions of the West; it is notable for its slow growth rate and long life, a thousand years or more.

Young branches are usually hairy, while leaves also often have a fine hair covering (especially the undersurfaces), becoming glabrous with age. Leaves are usually persistent but can wither during dry periods. Leaf margins are entire, and curved backwards.

Flowers may be solitary, or arranged in clusters of up to ten, per branch; they consist of a yellow or light brown tube, the hypanthium, with up to 25 stamens attached to the base, and five reddish, triangular sepals radiating outwards. Fruits are achenes, attached to the elongated (up to 2 inches), curving style, adorned with feathery hairs along its entire length.

There are three varieties of cercocarpus ledifolius. Var intricatus is a densely-branched shrub, characterised by strongly curved leaf margins, bent back almost to the midrib; the other two have margins only slightly rolled-under. Var ledifolius has small, narrow leaves, densely hairy underneath, while var intermontanus has wider leaves, sparsely hairy underneath. 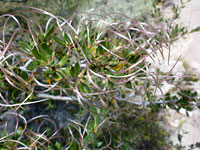