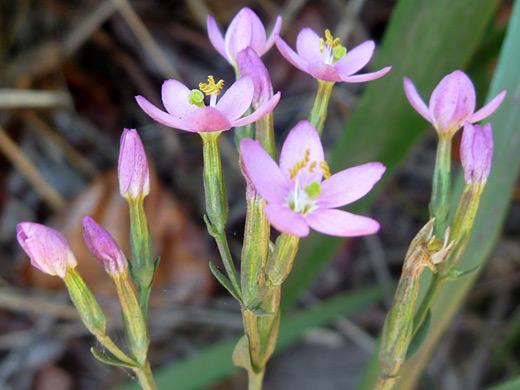 As its common name implies, centaurium erythraea is a naturalized US species, native to Europe and Asia. The plant is found mostly in coastal areas, from the Mendocino Coast in California, northwards into Washington. Leaves grow around the base, in a rosette, and in widely-spaced, opposite pairs all the way along the lightly branched stems, which are quite thin but grow upwards, to heights between 1 and 2 feet.

Flowers are produced in flat-topped clusters, typically with a dozen heads per stem. Each flowerhead is subtended by a pair of narrow bracts. Flowers have a narrow, dark green calyx and a tubular, greenish corolla opening to five pink lobes, about a quarter of an inch long. The calyx lobes are much longer than the fused part of the calyx tube. Five white, brown-tipped stamens and a green stigma project a little way beyond the flower center.