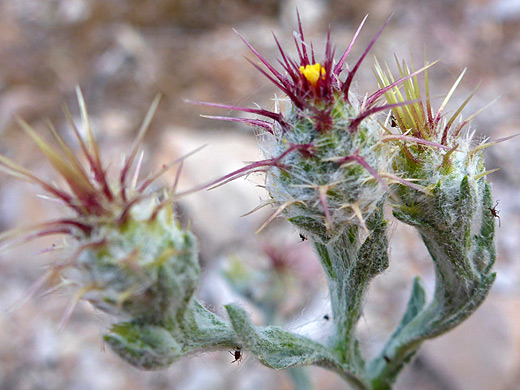 Centaurea melitensis originates in Africa and Europe - one of 29 non-native species of this genus in the US, having been introduced here late in the 18th century. Plants occur in a broad band from Oregon, southeastwards to Texas.

Stems and leaves have a covering of greyish hairs. Leaves are speckled with tiny resin glands, and they grow mostly around the base, where they are partly divided into irregular, rounded lobes. Stem leaves are much smaller, and not lobed.

Flowerheads form singly or in small clusters; they have a relatively small involucre, less than half an inch in length, ringed by broad green phyllaries from which project narrow, pointed appendages, light brown to purple in color. Small spines radiate from the base of each appendage, and the surface of the involucre is partly obscured by woolly hairs, though these tend to fall away during blooming. Flowerheads consist of several dozen narrow yellow disc florets, similar in height to the involucre. 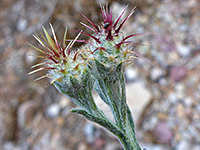 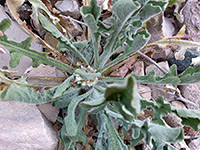