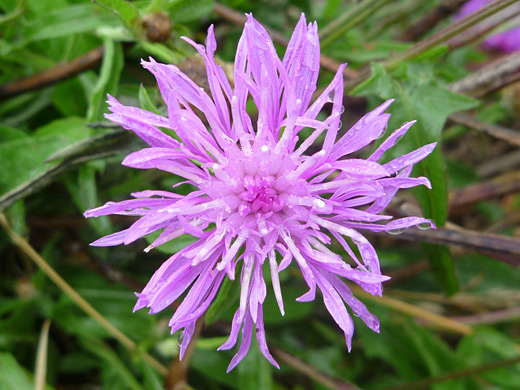 Centaurea jacea is a thistle-like plant originating in Europe, one of over 20 species in this genus introduced to the US, found in about half the states but, in the West, most common in Oregon and north California.

The pinkish purple flowerheads have disc florets only, and they have two forms; disciform, where the florets are all approximately equal in size and shape, and radiant (more common), where the outermost florets are longer, and angled outwards. The involucre is ringed by greenish, scale-like phyllaries whose edges bear long, thick fringes, colored brown or black. Directly underneath are several leafy bracts which, like the stem and leaves, have a covering of short hairs, either soft or bristly. Stems may branch only near the ground or most of the way to the tip. Lower leaves have distinct lobes, while those high on the stem are unlobed. There are three subspecies, differing in flower and phyllary characteristics. 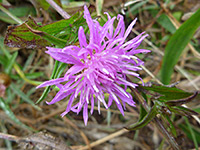 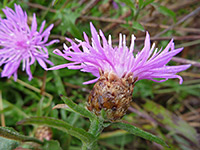 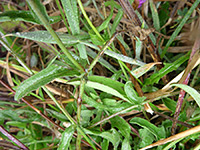