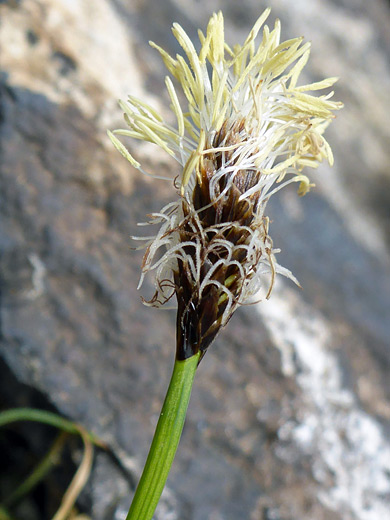 The culm (flowering stalk) of carex nigricans grows vertically upwards to a height of about one foot, and is similar in width all the way to the tip. The stalk is round in cross-section, becoming slightly oval higher up. Stems are lined by a few lengthwise ridges, more evident when dry. Flat, grass-like leaves grow at the base, sometimes slightly folded up along the midvein.

The inflorescence is a terminal, solitary spikelet, lacking any bracts, narrowly egg-shaped, and about one inch long. The spikelet is formed of several dozen brown, lanceolate to ovate scales (perigynia), arranged spirally. Scales are pointed at the tip; they are initially pressed against the stem but become spreading when mature. Each scale subtends a pistillate flower, which has three white stigmas. Above are scale-less staminate flowers, with white filaments and elongated, pale yellow anthers. 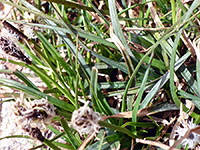