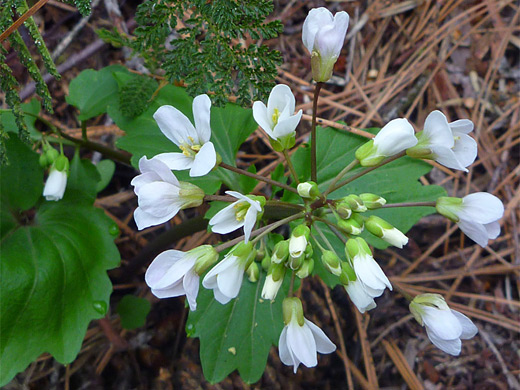 Cardamine breweri, a perennial, is a low-growing, leafy species found in moist, shady, wooded locations; it is most abundant in the Sierra Nevada and the northern Rocky Mountains. All parts are usually hairless, though the base of the stem may be sparsely hairy. Stems may grow vertically upwards or lean over. Leaves may be single but are usually divided; a large terminal leaflet and one or two pairs of smaller side leaflets. The largest is lined by large rounded teeth or lobes (up to 11); the smaller ones are more shallowly toothed. Leaflets are usually slightly wider than they are long. Stems have between 3 and 11 leaves.

The inflorescence is a bractless, spherical cluster typically containing around 20 flowers, which are formed of four green, oblong sepals and four white petals, not clawed, and between 2 and 3 times as long as the sepals.