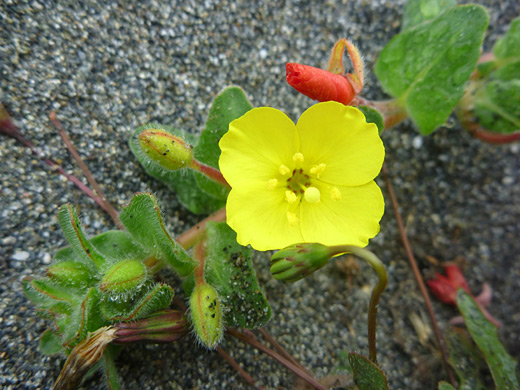 Camissoniopsis cheiranthifolia, Ossagon Trail, Prairie Creek Redwoods State Park, California
Camissoniopsis cheiranthifolia grows only beside the Pacific coast, from the Channel Islands northwards into Oregon, inhabiting sandy areas, sometimes only just above the high water line. Stems can point upwards but generally run along the ground, branching from the base. Leaves form a neat basal rosette and also grow all the way along the stems, at alternate intervals. Leaves usually have a dense covering of strigose hairs, pressed against the surface, and their edges may be lined by very fine teeth. Basal leaves are attached by short stalks.

Flowers are borne at the end of the stems; they have four green sepals and four broad yellow petals, about twice as long (up to 0.8 inches), usually with two (or one) red spots at the base. At the center are a spherical stigma and eight stamens, half of which (those opposite the sepals) are longer than the others. Anthers are attached to the stamens in the middle.

Ssp cheiranthifolia is a smaller-flowered variety (petals less than half an inch long), with the stigma and anthers held at similar heights, while ssp suffruticosa has petals over half an inch long, the stigma somewhat above the anthers, and hairs which are dense and silvery. 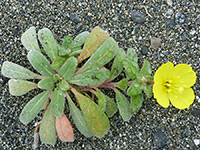 Plant with one flower 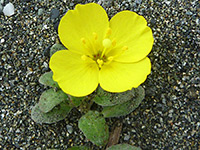 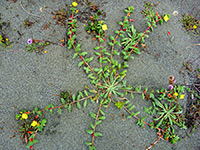