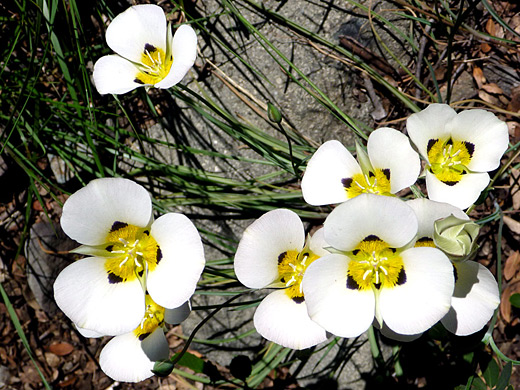 Like all members of this genus, the attractive, bell-shaped flowers of calochortus leichtlinii have three large petals with brightly colored bases; in this case the petals are white, or sometimes pale pink, while the base is yellow with a brown or black, triangular patch in the middle; overall, the darker-colored parts form a neat triangle. In the gaps between the petals grow three thin greenish bracts, also with a dark patch near the base. At the center of the flower is a star-shaped cluster of 6 stamens. Flowers grow at the end of thin, sparsely branched stems which have leaves only at the ground level, and which usually die before the blooms appear.