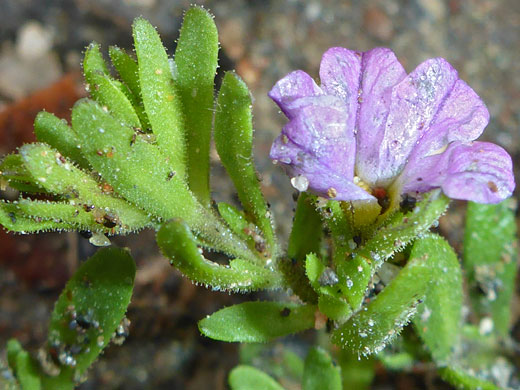 Calibrachoa parviflora (seaside petunia), Camp Creek Falls, Arizona
Calibrachoa parviflora is found along and near the coast of California, from San Diego to San Francisco, and is also widespread in the Sonoran Desert of Arizona. The branched stems grow along the ground, forming mats, rooting at the leaf nodes. The bright green leaves are fleshy, unlobed, and have a sparse covering of short, glandular hairs.

Flowers are solitary, at the leaf axils. The calyx is divided to the base into five lobes, similar appearance to the leaves, just a little shorter, up to 0.3 inches, though lengthening during the fruiting stage. The corolla is slightly longer than the calyx, with a funnel-shaped, white tube and five rounded, purple lobes. Corolla lobes have a prominent midvein. The five stamens are included within the tube. 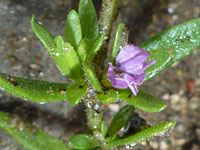 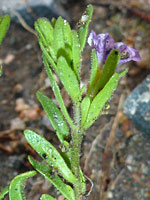