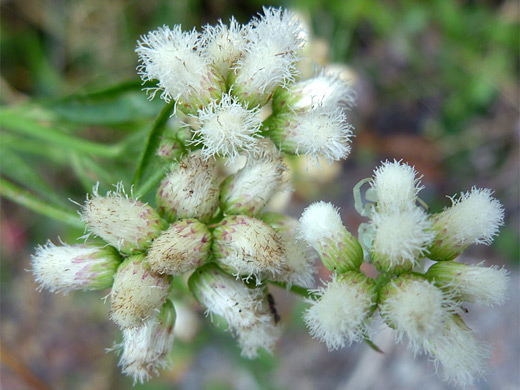 Fowerheads of baccharis glutinosa, along Shiveley Road, northern California
Baccharis glutinosa has a relatively limited distribution in California and south Oregon, growing along the coast and in nearby valleys. The main flowering season is late summer and early fall, though blooms can appear at any time of the year. Stems are produced singly, are lightly branched, and hairless, though somewhat sticky, covered by tiny black glands, as are the relatively large, lance-shaped leaves. The leaves have a prominent center vein, and, usually, two side veins, branching from the base. Leaf margins may be entire or lined with tiny teeth.

The white flowerheads are formed in a dense, flat-topped cluster, and they contain either staminate or pistillate florets, numbering 26 to 40 and 80 to 150 respectively, and approximately equal in size. Phyllaries are in several rows; they are green or purplish (often just the tips are purple), and narrowly lanceolate in shape. 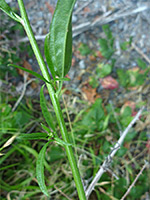