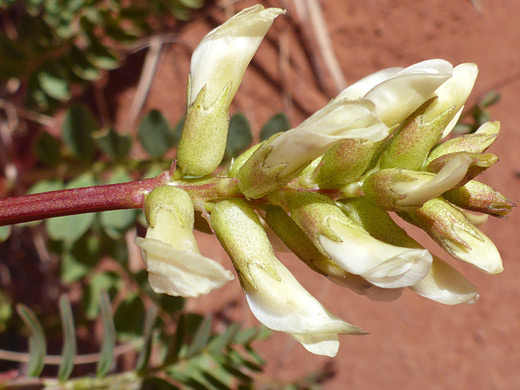 Astragalus praelongus is one of the easier-identified members of this large genus, since the flowers are white to cream rather than pink or purple. The keel petal is often purple at the tip, however, though this tends to be quite hidden, as the wing petals protrude at either side. The banner petal is relatively small, narrow, and not much recurved. The edges of the banner petal are commonly rolled back. Flowers point upwards when in bud, becoming pendent when mature. Calyces are light green and have a sparse covering of short, dark hairs. The inflorescence is a vertical, unbranched cluster extending up to 10 inches at the top of the stems, containing between 10 and 30 flowers.

Stems are erect, and the plant can form large clumps, up to 3 feet tall. Stems may be green or reddish. Leaves and stems may be hairless or sparsely hairy. Seed ponds are curved and inflated, up to 1.5 inches long; they can point upwards or downwards, and remain on the plant for a year or more, by which time they have dried, split open and become woody in appearance.

The common name, stinking milkvetch, comes from the bad odour emitted by the plant, which is a consequence of its preference for selenium-containing soils, such as those of the Chinle Formation and Mancos Shale. There are three varieties of astragalus praelongus (ellisiae, lonchopus, praelongus), differentiated by the shape and dimensions of the seed pod. 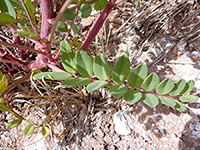 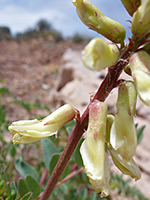 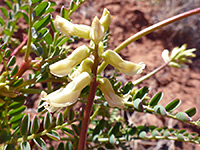 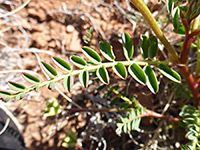 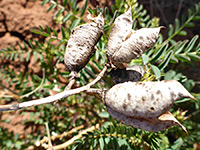 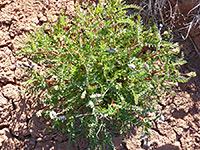 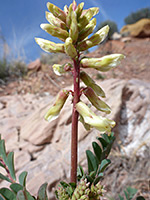 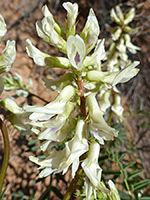