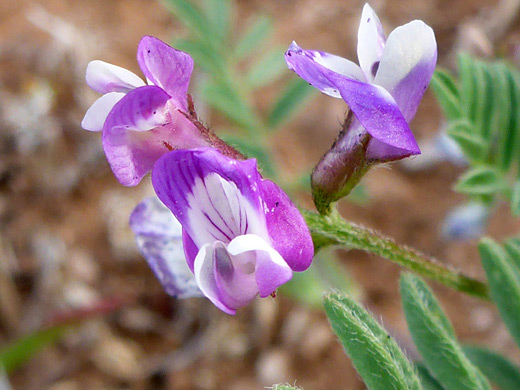 Astragalus nuttallianus is a small plant, generally just a few inches tall, with thin, arching, strigose-hairy stems, ascending or growing close to the ground. Leaflets are quite thick, sparsely hairy and often partly folded along the midvein. Leaf tips may be notched or blunt-pointed. Leaves form singly or in pairs, at relatively widely-spaced intervals along the stems.

Flowers are produced in small clusters, of up to four, and are small, around 0.2 inches long. The banner petal is typically white, but often purple around the edges, and crossed by purple veins towards the base. The wing petals are also white to purple. Fruits are linear pods, usually hairless, three-angled in cross-section, and grooved along one side. They are initially light green, becoming red/brown then black as they mature.

There are eight varieties of astragalus nuttallianus, most quite widespread, and the majority occupying distinct geographic regions; they vary in aspects such as the shape of the leaflet tips, the types of hairs on the calyx, and the length of the calyx. 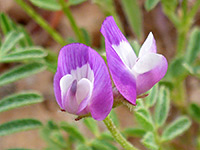 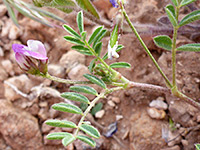 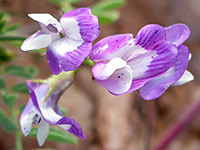